Xiaomi is expected to launch its next series of flagship phones next month in China, Xiaomi 12 series. According to recent leaks, the company will bring multiple devices under the lineup – Xiaomi 12, Xiaomi 12 Pro, Xiaomi 12 Ultra, and Xiaomi 12 Ultra Enhanced. It will also include a “Psyche” code-named phone, whose moniker/marketing name was unknown until yesterday. Reliable Xiaomi tipster Kacper Skrzypek has found the device on the IMEI Database with the moniker Xiaomi 12X.

Kacper claims that the Xiaomi 12X is code-named “Psyche”. It has been spotted on the IMEI Database listing with the model number 2112123AG. It was earlier rumoured to launch as Xiaomi 12 SE or Xiaomi 12 Mini. Now, it’s confirmed that the device will launch as Xiaomi 12X in the global market. Still, we are not clear about its name for the Chinese market. According to the tipster, the “psyche” code-name is not for the Indian market. So, the device might carry a different code name or a different moniker for the country.

The Chinese version of Xiaomi 12X with model number 2112123AC recently passed through multiple Chinese certification sites, including TENAA and 3C. The certification sites have confirmed that the device will pack Qualcomm Snapdragon 870 SoC and supports 67W fast charging.

According to the tipster, the Xiaomi 12X may come with a 6.28-inch AMOLED screen with 1080×2400 pixels (FullHD+) resolution, HDR10, and 120Hz refresh rate support. The phone could feature a 50MP primary camera and an in-display fingerprint scanner.

Xiaomi is yet to break its silence about the Xiaomi 12 series. Reports believe that the Xiaomi 12 will be the first to launch with Snapdragon 8-Gen-1 chipset (previously rumoured as Snapdragon 898). Qualcomm is expected to unveil the next-gen flagship chip in early next month. Hopefully, Xiaomi will announce its phone at that event, as it did last year with Xiaomi Mi 11.

Realme GT Neo2T Launches on October 19: Everything We Know About the Phone

Realme GT Neo2T will officially launch on October 19 in China at 2 PM local time. It could…
byVicky Kumar
No comments 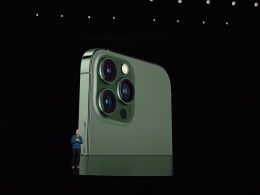 Apple has started manufacturing its iPhone 13 in India at their Chennai plant. Read along to know more about it.
byTeam Oyprice
No comments