Once Built, It Will Be World’s First Solar-Powered, Open Source Bitcoin Mining Project

Bitcoin Mining has garnered unfavourable attention from various government and environmental protection agencies for its ever-increasing power consumption, which is estimated to be larger than that of Norway’s entire power consumption. Seeing this Jack Dorsey’s Block (formerly known as Square. Inc), Blockstream and Elon Musk’s Tesla have joined hands to fix this by building the world’s first sustainable and Open Sourced Bitcoin Mining Infrastructure.

The $12 million project that will be a joint venture between Block and Blockestram, was first announced in June 2021 as part of Block’s pledge to be carbon neutral by 2030 and will be built at one of Blockstream’s U.S. sites in Texas.

The new state of the art facility which will is scheduled to be completed later this year is projected to produce around 3.8 Megawatts of solar renewable power using Tesla’s Solar Photo Voltaic array and a 12 megawatt-hour Megapack, which when mining Bitcoin equals to a hash rate of 30PH (Petahash).

According to the press release, besides being environmentally friendly, the new mining infrastructure is also Open Source. This means that the real-time metrics of the projectʼs performance, including its power output/consumption and the amount of Bitcoin mined, will be available to view publicly, 24/7 from any browser, providing the industry with a real-world, real-time case study of the world’s first solar-powered zero-emission Bitcoin mine.

That said, this new project will be great for setting an example for the crypto mining facilities that have been mostly powered by non-renewable power sources as well as getting the much-needed approval of the public, governments and Environmental protection bodies around the globe.

Also Read: Meta is Rumoured to be Working on a Virtual Currency Called ‘Zuck Bucks’

What do you think about the world’s first zero-emission Mining Infrastructure? Let us know in the comment section below. Until then, join us on Telegram, Facebook, or Twitter and stay up to date with the latest happenings in the tech industry 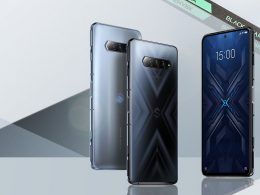 Black Shark 5 Series Launching on March 30: What to Expect?

Samsung’s next flagship Galaxy Tab series is in the works, which is expected to launch in early next…
byVicky Kumar
No comments