Tesla's New Cyberquad For Kids is Available to Purchase at a Price Tag of $1,900. 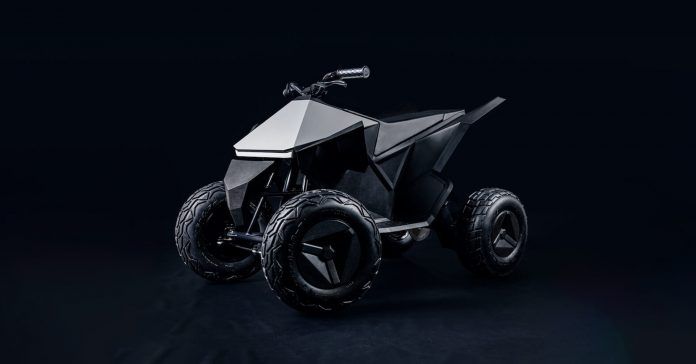 Tesla plans to capitalise on the holiday season and has unveiled its Cyberquad for Kids, a smaller version of the Cyberquad featured at the Cybertruck launch event.

Tesla’s Cyberquad made its first appearance at the infamous Cybertruck launch event in 2019. It was initially announced that the ATV would be sold as an accessory for the Cybertruck, but we haven’t heard anything about the Car or the ATV since then, thanks to production delays. However, Tesla is here to save the day, or we can say the holiday season with its Cyberquad for kids.

The all-electric ATV is powered by the same but smaller lithium-ion battery pack used for Tesla’s other EVs. Tesla claims that this smaller battery pack is enough to provide a range of about 15 miles (24km) once fully charged.

The ATV is rated to provide a top speed of 10mph, while it can also be configured to run at five mph. Apart from that, the design of the Cyberquad is directly inspired by the iconic Cybertruck and features a full steel frame, a cushioned seat, adjustable suspension, and LED light bars, just like the real Cybertruck.

Tesla also says that the Cyberquad will be suitable for kids eight years old and above, with a maximum weight-bearing capacity of 150 lbs (68kg).

The USD 1,900 Cyberquad is available to purchase on Tesla’s website and is expected to start shipping within the next two weeks. But good luck getting your hands on it, as the Cyberquad is already sold out, just like other products on the Tesla store, and we still don’t know whether it will be restocked or not.

Overall, it seems like an excellent toy for kids. Seeing Tesla’s decision to sell Cybertruck inspired goodies on its website makes us think that Tesla might be about to start production of the Cybertruck anytime soon.

Ayush Patelhttp://bit.ly/tswdesignstudio
I am a DJ, music producer, YouTuber as well as a graphic designer. I am always on the lookout for new things to learn about in my free time which led me to start blogging about tech as a side hobby.
RELATED ARTICLES
EVs

Tesla owners could use digital keys to open their cars, using the Tesla mobile app from the very beginning. However, the latest version of...
Read more
Games

Toyota has finally revealed it's first all-electric crossover EV BZ4X, that will be coming to the US in mid 2022 after it was initially...
Read more

Tesla owners could use digital keys to open their cars, using the Tesla mobile app from the very beginning. However, the latest version of...
Read more

Porsche is well renowned for making amazing cars for real-world racetracks. And Porsche doesn't want to stop here and wants to conquer the virtual...
Read more

Toyota has finally revealed it's first all-electric crossover EV BZ4X, that will be coming to the US in mid 2022 after it was initially...
Read more

New companies are popping up everyday and these companies are always in need of funding and the best way to secure the required funds...
Read more
Load more