Samsung Galaxy S22 Ultra is currently the most hyped smartphone in the market. It is expected to launch early next year alongside the Galaxy S22 and Galaxy S22+. Thanks to leaks and renders, we already know much about the phone and how it may look like. Now, a reliable Samsung tipster, Ice Universe has revealed the camera details of the Ultra model.

The tipster claims that Galaxy S22 Ultra will flaunt a quad-camera setup on the back. The camera island will include a 1/1.33″ 108MP Samsung ISOCELL HM3 main sensor with an F1.8 aperture and 85-degree field of view.

According to a recent Tweet from the same leaker Ice Universe, the Galaxy S22 Ultra will pack a 5000mAh battery and supports 45W fast charging. The battery is claimed to reach 70% in just 35 minutes.

Recent reports suggest that the Galaxy S22 Ultra will come in multiple colours – Black, White, Burgundy, Red, and Green. The device was earlier expected to feature a P-shaped camera module, which was later replaced with a waterdrop camera design in the renders shared by LetsGoDigital.

The Ultra model is said to have an S-Pen slot. Recent leaks suggest that the handset will be powered by Snapdragon 898 / Exynos 2100 SoC, depending on market availability. 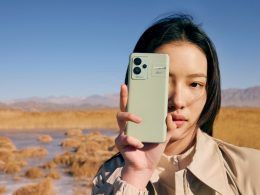 Realme has officaly hinted about its Realme Gt 2 and Realme GT 2 Pro launch in India. Read more to know more about its specifications, price and availability.
byKeval
No comments