Samsung Galaxy A13 5G is expected to launch in early 2022 as the company’s most affordable 5G phone. The company is yet to confirm the arrival of the phone. However, leaks surrounding the Galaxy A13 5G have revealed its key specifications. Now, we have got our first look at the phone; thanks to @OnLeaks for sharing the renders via Zouton.

The Galaxy A13 5G has a vertically aligned triple camera setup on the back. The LED flash unit is placed right next to the camera setup, and the company’s branding can be seen at the bottom. The phone is likely to be offered in at least two colour options – Black and White.

Galaxy A13 5G is said to have a 6.48-inch IPS LCD display with an 83.4% screen-to-body ratio. It has a teardrop notch on the front to house the selfie camera. The phone can be seen having cutouts for a 3.5mm audio jack, USB Type-C port, microphone hole, and speaker grille at the bottom. The power button is on the right side, which doubles as the fingerprint scanner.

The upcoming Galaxy A13 5G carries model number SM-A136U that was recently spotted on Geekbench. It revealed that the device is powered by MediaTek Dimensity 700 chipset paired with 4GB RAM. The phone is likely to be offered in a 6GB RAM variant too. It boots Android 11 out of the box, flavoured with Samsung’s One UI skin.

The phone is said to have a 5,000mAh battery with 25W fast charging via a USB Type-C port. The triple camera setup is said to include a 50MP primary camera sensor, a 5MP ultrawide shooter, and a 2MP depth sensor. Samsung has not yet confirmed the arrival of Galaxy A13 5G. However, the device is expected to launch early next year at a starting price of $290. 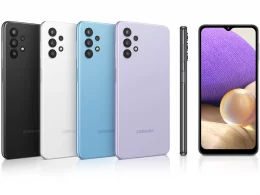