Redmi K50 Gaming Edition is now officially confirmed to feature a 64MP Sony IMX686 primary camera on the rear side. It has a 20MP Sony IMX596 front camera. The company has also teased a rear camera sample which appears to have much detail. It shows a good quality image output under the low-light condition.

The device will be powered by the Qualcomm Snapdragon 8 Gen 1 chipset and features a 40% better heat dissipation. Redmi K50 Gaming Edition phone has a 4,860 sq. mm vapour chamber. According to some Chinese tipsters, the device has been greatly improved in terms of thermal management.

Also Read: OxygenOS 13 Confirmed: OnePlus Might Not Kill its Beloved Operating System After All

Past reports suggest that the Redmi K50 Gaming could come with a 6.67-inch FullHD+ OLED screen with a 120Hz refresh rate and 480Hz touch sampling rate. The triple camera setup on the back is said to include a 64MP Sony IMX686 primary sensor, a 13MP OmniVision OV13B sensor, and a 2MP sensor. The phone could pack a 4,700mAh battery with support for 120W fast charging. On the software front, the Redmi K50 Gaming will boot Android 12-based MIUI 13 skin at the top. 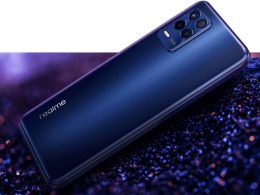 Realme 8s 5G users can enroll themselves to get an early taste of Realme UI 3.0.
byVicky Kumar
No comments