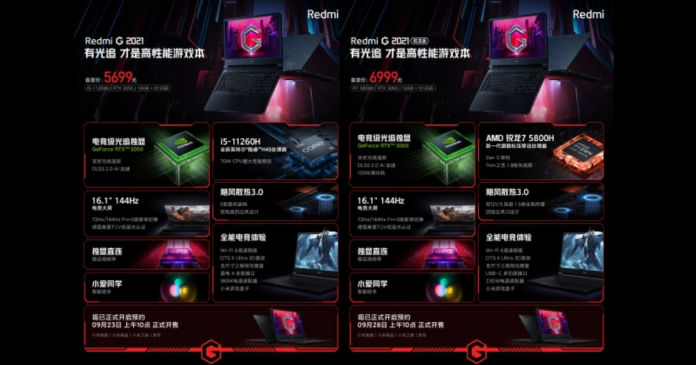 Xiaomi just launched two Redmi G Gaming laptops (via GSM Arena) with Intel, and AMD CPUs and both have RTX Series graphics cards. The Intel version comes at a lower price with RTX 3050 GPU, while the AMD version is packed with a powerful RTX 3060.

The Redmi G Gaming laptops come in at 16.1-inch display sizes with a refresh rate of 144Hz. If you are playing certain heavy games, then you can lower the refresh rate to 72Hz. The display is TUV Rheinland certified and also comes with low blue light certification.

The memory configuration on both these Redmi G gaming laptops is the same – 16GB of RAM paired with 512GB of SSD storage. Connectivity features include Wi-Fi 6, a Backlit keyboard with three levels of adjustment (brightness), USB Type C multi-function interface and DTS-X Ultra 3-D sound.

The cooling architecture has been upgraded to Xiaomi’s Hurricane Cooling 3.0. It comes with a pair of 12V fans and five all-copper heat pipes, and four sets of air vents dissipate all this heat.

Intel variant comes with i5-11260H, a six-core 12 thread processor with a max turbo frequency of 4.4 GHz. The maximum power draw of this CPU will be 70W. This CPU is paired with Nvidia’s RTX 3050 GPU. This GPU comes with DLSS 2.0 and Ray-Tracing. All this will be powered by a 180W power brick provided in the box.

Now, the AMD variant is the one that caught a lot of attention as it is powered by Ryzen 7 5800H, an eight-core, 16 thread processor with a max boost clock speed of 4.4 GHz. This is a potent processor, and it has been paired with an equally powerful GPU, the RTX 3060. The RTX 3060 is way powerful than the RTX 3050, and there is no argument for that. To power this combination, the laptop comes with a 230W power brick.

Do let us know what are your thoughts on both these laptops. Until then, stay tuned to Oyprice and subscribe to our YouTube channel for regular news and updates.

Darryl D'Souza
Darryl is the guy you'd find sitting quietly, scrolling through his phone. Looking at life from a different perspective is what studying Psychology has taught him. When not engrossed in consuming articles and videos about tech, you can find him playing Valorant (Hard stuck Bronze BTW)
RELATED ARTICLES
Technology

Redmi is all set to launch its highly anticipated Redmi Watch 2 on October 28th in China. The launch of this watch will be accompanied...
Read more
Technology

Razer is an already established brand famous among the gaming community. Razer has been making various PC accessories, including microphones, webcams, keyboards, and mouse....
Read more

Redmi is all set to launch its highly anticipated Redmi Watch 2 on October 28th in China. The launch of this watch will be accompanied...
Read more

Cryptocurrencies are on the rise, and so are the demands for GPUs that can be used to mine these cryptocurrencies. The demand is so...
Read more
Load more