After launching smartphones for the last 3 years, Realme is gearing up to enter into the laptop segment. Realme’s laptop is likely to be called the Realme Book. The laptop is aimed at students and working professionals. Let’s take a look at the specifications and leaked prices of Realme Book.

According to a leaked poster in China, the Realme Book will be priced at Yuan 4699 (Rs 53,000 approx.). At the moment, it is not clear what the price is for which variant, as the Realme Book will have a total of five variants. But other several leaks and several reports suggest that pricing will be around Rs 50,000.

Hardware on the Realme laptop

The laptop will be powered by Intel Core i3 and i5 11th Gen processors. To be more specific 1135G7 is the i5 11th gen processor used in this machine. This is a 4 Core 8 Thread processor. It can run at Max 4.2GHz.

Currently, the must-have thing on any laptop is SSD. Since the Realme Book focusing on Students and working professionals then we can surely expect that this notebook will depend on SSD for storage.

Thanks to Geekbench we came to know that Realme Book will get 16GB DDR4 RAM. Also, we can expect that the base variant will get 256GB SSD. According to TUV Rheinland certification, the Realme Book will have a total of five variants. The Model number of these five variants are RMNB1001, RMNB1002, RMNB1003, RMNB1004, and RMNB1005.

The Realme Book will feature a 54Wh battery. As per the 3C Certification, Realme Book will use 65W charging via USB C. This means you don’t need to carry any specific charging cable other than your smartphone’s one. It’s another confirmation that the laptop will be focused on those who want a lightweight machine.

Lenovo has been selling laptops with dual displays since 2020. However, it was never seen as a good option…
byAyush Patel
No comments 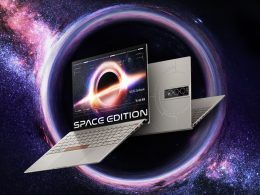 If your laptop takes a lot of time to boot up, the applications run slowly and you are…
byTeam Oyprice
No comments

After launching smartphones for the last 3 years, Realme is gearing up to enter into the laptop segment. Realme’s laptop is likely…
byTeam Oyprice
No comments