Razer Has Launched Its Own Lineup of PC Components Including AIO Coolers, Case Fans, and Power Supplies 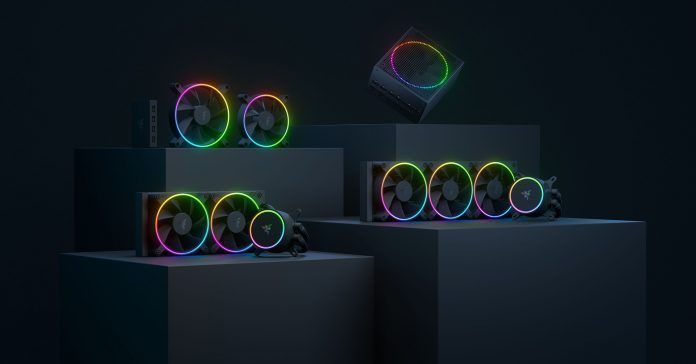 Razer is an already established brand famous among the gaming community. Razer has been making various PC accessories, including microphones, webcams, keyboards, and mouse. The brand has expanded into the PC component space and has revealed many new products, including all-in-one (AIO) coolers, RGB cooling fans, and power supplies.

Razer’s new “Hanbo” AIO cooler made in collaboration with Asetek, that can be orientated 360 degrees, allowing you to place it in any case configuration, comes in two sizes, with 240mm and 360mm radiators.

As of now, the company hasn’t revealed anything about the pricing of its AIO cooler. However, it is expected to be made available sometime in November.

Apart from the AIO coolers, the brand has also revealed its new “Kunai” cooling fans, which will be available in two sizes- 120mm and 140mm, feature a built-in RGB ring with 18 and 22 individually addressable LEDs, respectively.

All these cooling fans can work with Razer’s new Synapse software, allowing the user to configure the fans’ speed curves with fan speeds as high as 2,200rpm on the 120mm and 1,600rpm on the 140mm version.

Along with these cooling fans, Razer has also revealed its new Fan Controller, which can control up to 8 fans while providing integration with Synapse to provide customizable fan curve controls. The new fan controller comes with a magnet at the rear, allowing you to hide it during cable management, as it can stick to any steel at the back of a PC case.

The PSUs come in 3 configurations, including 750W, 1200W, and totally overkill 1,600W. Razer also claims that the new PSUs will be using Japanese 105-degree rated capacitors. The new Razer “Katana” power supplies are expected to start shipping sometime in early 2022. However, Razer hasn’t announced pricing for the Katana power supplies yet.

What do you think about Razer’s new lineup of PC components? Let us know in the comments below. Until then, stay tuned to Oyprice and subscribe to our YouTube channel for regular news and updates.