Porsche is well renowned for making amazing cars for real-world racetracks. And Porsche doesn’t want to stop here and wants to conquer the virtual racetracks and has revealed its first virtual sports car that has been exclusively designed for a video game, specifically for Sony’s upcoming Gran Turismo 7.

Sony’s Gran Turismo series has been one of the most critically acclaimed game series since Sony revealed its PS1, back in 1997, with every instalment of the game providing an incremental upgrade in terms of graphics and selection of cars. However, Porsche was mostly absent from the Gran Turismo world until 2017 due to licensing agreements.

The company’s first virtual concept car under the Vision Gran Turismo program will be making its debut in its seventh instalment, aptly named Gran Turismo 7, which is scheduled to be released exclusively for Sony PlayStation 4 & 5 on the fourth of March, 2022.

Porsche all-electric virtual concept car that you wouldn’t be able to drive on the streets has a few tricks up its sleeve, including futuristic features that would work only in a video game or perhaps sometime in the near future.

From the outside, The Porsche Vision GT features a set of square-shaped headlights reminiscent of the real-life Taycan, while the wide, sleek haunches and light strip at the rear shed light on Porsche’s signature style found on Porsche’s current lineup of cars.

While from the Inside, the car features a yoke-style steering wheel, with a curved holographic display for the instrument cluster behind it, which is still reminiscent of the shape and layout of Porsche’s current gauge clusters.

While we don’t expect the Porsche Vision GT to make it to production any time soon, it is very exciting for Porsche and gaming fanboys alike. It provides us with a glimpse into the future of electric cars in general.

What are your thoughts on Porsche designing the world’s first virtual sports car for Gran Turismo 7? And are you as excited as us to play the new game when it arrives? Let us know in the comments. Until then, stay tuned to Oyprice and subscribe to our YouTube channel, or join us on Telegram, Facebook, or Twitter. 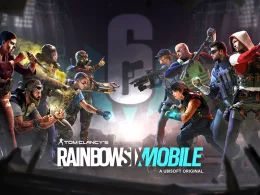 Rainbow Six Mobile has been Announced by Ubisoft

Ubisoft has announced that they are going to launch the Rainbow Six Mobile which will be free and available on both Android and iOS. Read along to know more about the upcoming mobile game from Ubisoft.
byTeam Oyprice
No comments

During the Summer Game Fest live event, a brief clip showed a new valorant agent at the beginning in the background…
byTeam Oyprice
No comments

BGMI (Battlegrounds Mobile India’s) first and most-anticipated update is here! – After many rumours and anticipations, BGMI 1.5.0…
byTeam Oyprice
No comments

If you are looking for ways to redeem Free Fire codes then you are at the right place. In this article we will talk about how to redeem codes in Free Fire.
byTeam Oyprice
1 share
1
0
0
No comments