Oppo F21 Pro 4G is all set to launch alongside F21 Pro 5G on April 12 in India. The smartphones are confirmed to feature a 64MP primary camera on the rear side. Last week, we saw the leaked unboxing video of the Oppo F21 Pro 4G that revealed its key specifications. Now, more details about the device have emerged on the internet.

According to a reliable tipster Mukul Sharma, the Oppo F21 Pro 4G will have a 6.4-inch AMOLED screen with FullHD+ resolution, a 20:9 aspect ratio, 90Hz refresh rate, and Gorilla Glass 5 protection. The device is tipped to be SGS Eye Care Display certified.

The F21 Pro 4G will feature a triple camera setup on the back that includes a 64MP primary camera with f/1.7 aperture, a 6p lens, and a 78-degree field-of-view. The main sensor is joined with a 2MP microlens that has an f/3.3 aperture, a 3p lens, 5d-degree FOV, and the third one is a 2MP bokeh lens. It will be equipped with a 32MP front-facing camera.

Further, the tipster claims that Oppo F21 Pro 4G will come with 8GB LPDDR4x RAM and 128GB storage. The device will also support 5GB of virtual RAM. A 5,000mAh battery could be packed inside the F21 Pro 4G with support for 33W fast SuperVOOC charging. It is said to fully charge the battery in 65.5 minutes. The device is also tipped to come with a multi-cooling system for reducing heat during gaming or other high processing tasks.

More than a week ago, Realme officially revealed the Realme GT 2 Pro and announced its launch date as 4…
byTeam Oyprice
No comments

Vivo, the Chinese smartphone brand, unveiled a new smartphone, the Vivo Y73, for Indian users on Thursday, adding to…
byTeam Oyprice
One comment

Oppo is reportedly in the works to expand its popular Reno lineup with a new set of phones.…
byVicky Kumar
No comments 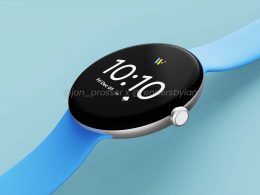 Google Pixel Watch got Bluetooth SIG certification. It might come in 3 variants. And it will run on WearOS.
byKeval
No comments