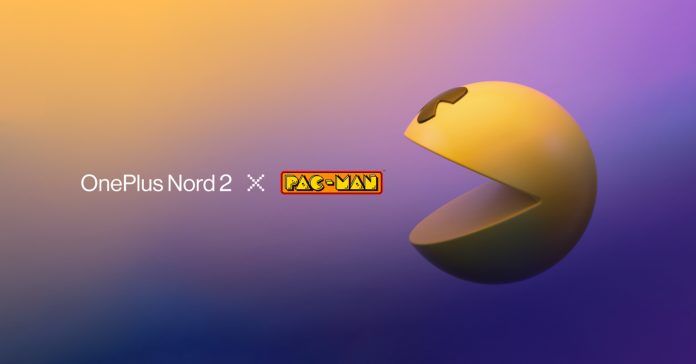 OnePlus collaborating with other franchises or companies to design special editions of their devices is nothing new, as we have seen in the past with OnePlus 6T Mac-Laren Edition, OnePlus 8T Cyberpunk 2077 Edition, and so on.

And OnePlus isn’t giving up on this tradition anytime soon as it has revealed it’s the latest collaboration with Pac-Man to release a limited edition of its OnePlus Nord 2 smartphone.

The announcement about the new collaboration was made via a post on the OnePlus Forum. However, the company still hasn’t shared a single image of the phone. It is speculated that the phone will glow in the dark, reminiscent of the classic arcade clubs. It will include many new software tweaks in the form of new skin, including a new fingerprint unlock and charging animations and many hidden easter eggs strewn across the system.

In terms of the specs, the phone may launch with a Snapdragon 778G SoC rather than the Dimensity 1200, as pointed out by earlier reports. The phone will only be limited to a single configuration that includes 12GB of RAM and 256GB of internal storage.

We will have to wait until the second half of November to see how the device will look. However, in terms of pricing, the device will cost Rs 37,999, which is Rs 10,000 higher than the original Nord 2 base variant. The handset will be available to purchase officially on Amazon.in.

What do you think about the OnePlus and Pac-Man collaboration? Let us know in the comments. Until then, stay tuned to Oyprice and subscribe to our YouTube channel, or Join us on Telegram, Facebook, or Twitter.