Motorola Edge 20 Pro Could Launch in India on October 1

Motorola Edge 20 Pro has already been launched in several regions. Last month, it went official in China as Motorola Edge S Pro. In Europe, the device starts at €699.99 (roughly Rs 60,500). Flipkart’s Big Billion Days sale is scheduled for next month. So, we can expect the Motorola Edge 20 Pro to be priced under Rs 60,000, as a part of the offer.

The device has a 6.7-inch OLED display with FullHD+ resolution, 144Hz refresh rate, and HDR10+ support. It is powered by Snapdragon 870 5G chipset paired with up to 12GB RAM and up to 256GB internal storage. It has a fingerprint scanner embedded in the power button.

Which feature / specs of Motorola Edge 20 Pro excites you the most? Let us know your thoughts in the comments below. Stay tuned to Oyprice and subscribe to our YouTube channel. 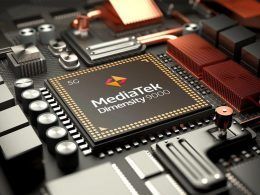 A Geekbench Listing Reveals Raw Power of Dimensity 9000 Compared to Other Chips Out There.
byAyush Patel
No comments