Motorola revealed it’s first ever tablet the Moto G20 earlier this year that was a 8-inch tablet targeted towards the budget segment, however according to the information found on Google Play Console and Geekbench Motorola might be working on a new Moto G70 tablet with a 11-inch display which is expected to be a slightly more premium tablet that it’s little brother Moto G20.

According to GPC (Google Play Console) the Moto G70 is speculated to feature a MediaTek Kompanio 500 SoC (MT8183A) with 4x Cortex-A73 CPU combined with 4x Mali-G72 GPU. While on the other hand the Geekbench listing paints a whole other picture, and detects an entirely different chipset, the MT6785 i.e. MediaTek Helio G90T with 2x Cortex-A76 (high-performance) CPU cores and 4x Cortex-A55 (power-efficient) CPU cores combined with a Mali-G76 GPU.

However, we suspect that the Tablet will feature a MediaTek G90T processor rather than the Kompanio 500, as we get very similar Geekbench results upon comparing the Moto G70’s results to those of other devices featuring the same MediaTek Helio G90T processor.

Apart from the processor the new tablet is rumored to feature a 2000x1200px panel with a 15:9 aspect ratio, and will ship with 4GB of RAM paired with 64GB or 128GB of built-in storage along with a 5000mAh battery with support for 10W charging and front-mounted speaker that has Dolby Audio support. While on the software side of things, the tablet will run on Android 11.

However, we still don’t know anything more about the tablet’s camera or designs at the moment, but it is expected the Moto G70 will take its design cues from Lenovo Tab P11 Plus an 11-inch tablet based on the G90T.

Overall, the new Moto G70 will definitely be a huge upgrade over its predecessor Moto G20, which came with a Helio P22T chipset combined with 3GB of RAM and 32GB of internal storage while at the same time having a smaller 8-inch IPS LCD panel with a resolution of 1280×800 pixels. 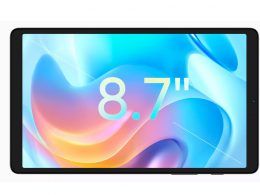 Realme Pad Mini does not feels too heavy on the wallet.
byVicky Kumar
No comments