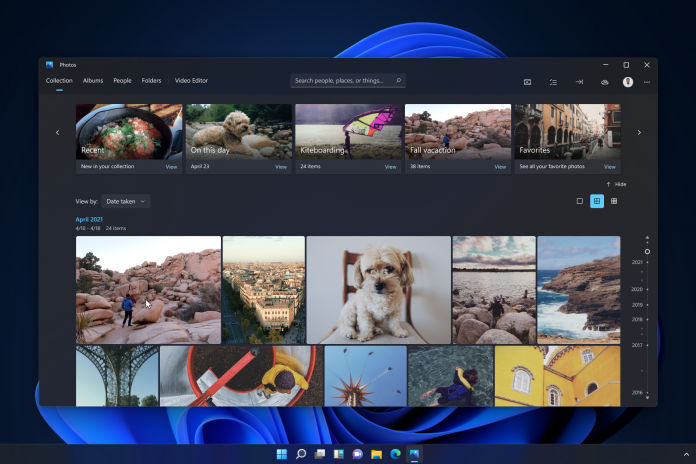 Windows 11 has been touted by many as the most elegant and functional update for Windows since Windows 8 was released in 2012. Microsoft is finally bringing uniformity throughout the UI with rounded corners, system-wide animations, a new Mica material theme along the completely redesigned app.

Microsoft has already completely redesigned the Settings app, Microsoft Store, Calculator & Mail as we have seen during the Windows 11 reveal event. Microsoft is slowly redesigning its other system apps to make them ready for release on October 5, along with Windows 11.

This time around Microsoft has revealed a completely redesigned Photos app showing off its “fluent design”, complete with rounded corners and its new mica material theme.

The older photos app was not really great and people even used a third-party photo viewer instead of the default one because of how clunky it looked & lacked functionality.

But the changes to the new Photos app aren’t a complete overhaul either. The photo viewer features a new edge-to-edge layout with an updated toolbar up top for all your core photo editing tools rather than a fixed box, with a filmstrip down below to make navigating through your photo roll much simpler. And when you just want to see your pics without any other distractions, you can easily hide the Photos app’s toolbar and filmstrip by clicking directly on the photo viewer.

The editing tools listed in the toolbar will include the basic photo editing tools such as crop, rotate, and touch-up, along with a button to view a picture’s metadata and a heart icon so you can quickly mark your favourite pics

Microsoft has also added a new multi-view mode which allows you to open multiple photos at once allowing you to do comparisons while editing as you can see in the image below.

If you want to get a hands-on experience of the new Photos app, you need to be a Windows Insider and download the latest version of Windows 11 beta. But if you don’t want to go through the hassle of getting the update, you can wait until Microsoft officially launches Windows 11 for download on October 5.

The redesigned Photos app looks cool, but we will have to wait and watch as to when new redesigns will be made to the other apps, such as the file explorer app, which is a Frankenstein between an older and newer design

What do you think about the new redesigned Photos app? Let us know in the comments below.

Until then, stay tuned to Oyprice and subscribe to our YouTube channel for regular news and updates.

Redmi is all set to launch its highly anticipated Redmi Watch 2 on October 28th in China. The launch of this watch will be accompanied...
Read more
Technology

Razer is an already established brand famous among the gaming community. Razer has been making various PC accessories, including microphones, webcams, keyboards, and mouse....
Read more

Redmi is all set to launch its highly anticipated Redmi Watch 2 on October 28th in China. The launch of this watch will be accompanied...
Read more

Cryptocurrencies are on the rise, and so are the demands for GPUs that can be used to mine these cryptocurrencies. The demand is so...
Read more
Load more