The Meizu 18 and 18 Pro are the company’s latest flagship phones and were launched earlier this year. Now, the company is reportedly gearing up to add new members to the Meizu 18 series which could be called Meizu 18s and Meizu 18s Pro. Today, two new Meizu phones carrying model numbers M182Q and M192Q appeared on the TENAA certification, which is believed to be a part of the Meizu 18 series.

The M182Q could be Meizu 18s and the M192Q could belong to the Meizu 18s Pro. As of now, the company has announced anything about the new Meizu 18 series devices. Since the devices are now surfacing on the certification sites, it is indeed getting closer to the launch. TENAA listing for the phones reveals its specifications as well as the renders.

TENAA images reveal that Meizu M192Q has a curved display with a punch-hole cutout for the selfie camera. It has a rectangular camera module on the back housing four sensors and an LED flash. The power button and volume rockers are there on the right side of the phone.

Around the back, Meizu M192Q boasts a quad-camera setup which consists of 50MP + 32MP + 8MP + 0.3MP sensors. It is the same camera setup that is used in Meizu 18 Pro, which has a 50MP primary camera with OIS, a 32MP ultrawide lens with a 130-degree field of view, an 8MP telephoto lens with 3x optical zoom, and the last one is a 0.3MP 3D TOF sensor. The M192Q also has a 44MP selfie camera. It seems like the Meizu 18s Pro will have no changes in terms of cameras.

The design is pretty much similar to the Meizu 192Q (as pictured above), however, they differ in terms of camera setup. The Meizu 18s (M182Q) features a triple camera setup on the back, while the Pro model has an additional camera sensor.

According to the TENAA listing, the device has a 6.2-inch AMOLED panel with 1440×3200 pixels resolution. Under the hood, it is powered by a 2.95GHz octa-core processor, which could be the same as in Meizu M192Q. The triple camera setup consists of 64MP + 16MP + 8MP sensors, which is the same setup used in Meizu 18. It has a 20MP front-facing camera.

Meizu M182Q has a 3,910mAh rated capacity battery, which could have a typical capacity of 4,000mAh. Other notable specs include – 5G connectivity, fast charging support, and an under-display fingerprint sensor. 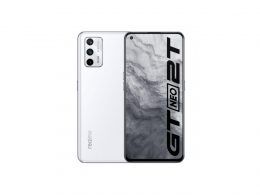