Everything That You Should Know About The New GoPro Hero 10 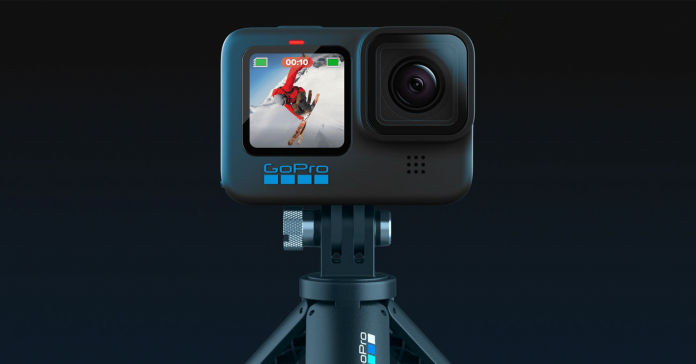 Last year, GoPro provided a complete overhaul to the hero lineup with the release of
GoPro Hero 9. They added a front-facing screen, a 5.3K camera sensor and more battery.

This year’s GoPro Hero 10 feels a bit more iterative as it builds on the foundation laid by the older GoPro Hero 9. While the GoPro Hero 10 looks almost identical to the Hero 9, there is one big change inside that sets the stage for much bigger things to come.

Although GoPro claims the Hero 10 is three per cent lighter than the Hero 9 at 153g versus 158 which is not much however there is one distinguishing feature between the two models it’s the blue labelling on the Hero 10 as opposed to the Grey decals on.

The camera features a grippy rubber finish and comes with a mounting mechanism, two physical rubber buttons for power and mode switching, two screens, and a compartment for the battery, USB-C port, and microSD card slot on the new GoPro Hero 10.

GoPro claims that the removable lens covers are more scratch resistant and water repellent. The GoPro Hero 10 uses the same batteries as the Hero 9. But because it can shoot at a higher resolution such as 5.3K at 60 frames per second, you’re going to see a significant battery drain. The GoPro Hero 10 also features a new GP2 processor. The GP2 processor is the first processor change to the Hero lineup since the Hero 6 that came out in 2017 and it provides a much-needed performance upgrade. The battery size is still the same as its successor.

GoPro claims the removable lens covers are more scratch resistant and water repellent while at the same time producing less ghosting this year.

Secondly, the front screen now has a higher frame rate even though it’s exactly the same hardware as the Hero 9. In most modes, you will now see 30 frames per second image on that front screen resulting in a lot less lag on the front screen when actively recording.

But most importantly, the Hero 10 can capture content quicker in photo mode. Hero 10 takes and saves photos much faster than Hero 9.

Although it has the same 23.6MP sensor that was used in the Hero 9, GoPro claims that the GP2 processor can get more out of the camera. Hero 10 takes 23MP photos in 3 modes live burst, night and, standard photo. However, GoPros aren’t really made for photos so if you’re someone who captures a lot of images, it’s better to look out for something else.

In terms of video, the Hero 10 can shoot 5.3K video at 60 frames per second, 4K at 120fps and 2.7K at 240fps. There is a frame rate boost at every resolution compared to the Hero 9 and also features Hyper Smooth 4.0 which is GoPro’s in-body stabilization software that comes with the device.

There’s simply no other camera at this size that is this powerful and if you’re currently an owner of a Hero 8 or older, the Hero 10 will feel like a huge upgrade. However, we don’t think it’s a big enough leap forward for Hero 9 users.

Hero 10 has enough features for the professionals and is easy enough to pick up for a hobbyist too. The GoPro Hero 10 is a balanced camera that provides plenty of resolutions for any task an easy to use UI and a subscription service that’s actually worth its price as you can get the camera at a discounted price.

What do you think about the GoPro Hero 10? Is it something that you would like to use? Let us know in the comments below. Until then, stay tuned to Oyprice and subscribe to our YouTube channel for regular news and updates

According to a new patent, OPPO is still working on a future wireless charging gear. The company patented a power bank that doubles up...
Read more
Load more