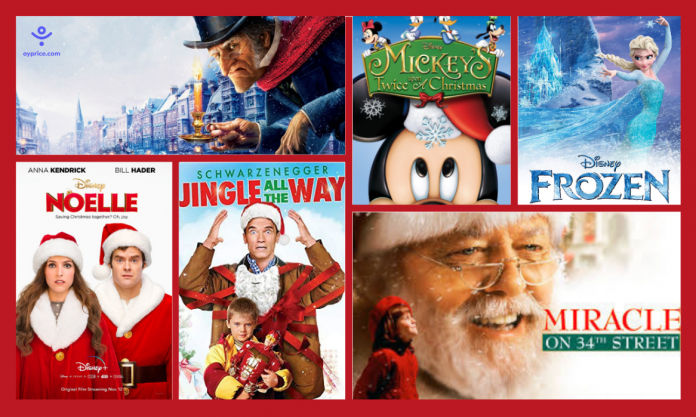 Ho Ho Ho! With just a few days left for the Christmas Day, Oyprice is back with yet another list to help with your Christmas blues. Disney+Hotstar launched in India this year right before the IPL aired on the streaming platform, and many of us bought the subscription to watch the nail-biting cricket tournament. Though, the tournament has ended, but you can still watch many of the amazing films that the platform has to offer, and what better occasion to do it, than the Christmas Eve!

Oyprice brings to you the list of the best Christmas movies on Disney+Hotstar to binge-watch this holiday season. Follow the journey of Santa’s daughter in the wonderful Noelle, or learn to have faith with the classic Miracle on 34th Street. Whichever you choose, you and your kids are surely gonna have one amazing Christmas with these awesome holiday flicks.

Anna Kendrick playing Santa’s daughter! If that doesn’t excite you enough we don’t know what will. The movie follows Noelle, Santa’s daughter, on a journey to find her brother Nick, who is supposed to take over as Santa but got cold feet. On this heartfelt and funny journey, Noelle finds the true meaning of Christmas.

Disney’s latest addition to its treasure of movies, Godmothered, isn’t the typical Christmas movie but if you are a true Disney fan and haven’t gotten around the watching this movie yet, then Godmothered is the perfect watch for your Christmas binge. It follows Eleanor, an unskilled fairy godmother, on a journey to help a young girl and prove to the world that fairy godmothers are indeed worthy.

The Christmas Eve isn’t complete without a screening of the classic Charles Dickens’ tale, A Christmas Carol. In this Disney’s animated version of Christmas Carol, Jim Carrey voices the grumpy old Scrooge, whose belief in Christmas changes after he is visited by three ghosts on Christmas Eve.

If Mickey Mouse used to be your favorite cartoon character during your childhood, then you and your kids are totally going to love this Christmas special starring Mickey and his friends in a three-part anthology of three great Christmas tales.

The perfect sequel to the 1999 Mickey’s Once Upon A Christmas, with even better graphics and animation, this movie presses on the importance of opening your heart to the true Christmas spirit and joy, and also gives a great lesson on the power of friendship.

This Classic Holiday special by Disney needs no introduction, having won the hearts of children and adults around the world. Along with great graphics, music and funny dialogues, the movie also puts emphasis on the importance of the love of your family.

If you and your kids already binged on the magical first part of this snowy flick, then be sure not to miss this amazing sequel. The movie will be a perfect Christmas treat for children as well as adults, continuing the story of the lovely duo, Anna and Elsa.

Miracle on 34th Street was an instant holiday hit back in 1947 and continues to win hearts even today. This heartwarming tale about a department store Santa, who believes that he is the real Santa Clause, teaches the importance of believing in the true spirit of Christmas and above all, just having faith!

This classic holiday flick, starring Arnold Schwarzenegger as the dad who constantly disappoints his son but on Christmas day, he plans to do otherwise, by getting his son an action figurine called Turbo Man, which is all he wants for Christmas. Unfortunately, all the stores have sold out of it and now he has to travel all over town to find the figurine while competing with many others who are behind the same.

In this sequel to the 1996 classic, the plot stays a little similar to the original one, only replacing the Turbo man with the famous talking bear, Harrison Bear. In this Christmas comedy, Larry the Cable Guy replaces the role of Arnold Schwarzenegger with Brian Stepanek set in his opposing role.

Khushi Lokapurhttps://khushilokapur.wixsite.com/website
Khushi is currently studying Business Administration but her zeal for learning new things and passion for writing brought her to Oyprice. Apart from writing content, she also heads Oyprice's social media team and is continuously looking for opportunities to expand the horizons of her knowledge. In her free time, you'll find her playing video games, cooking, or in a deep existential crisis.
RELATED ARTICLES
Entertainment

Netflix is a popular movie/series streaming platform. The company plans on turning an incident that took place five years ago just a couple of...
Read more
Entertainment

League of Legends, the popular game developed and published by Riot Games, has amassed huge attention from the gaming community since its release in...
Read more
Entertainment

Netflix is a popular movie/series streaming platform. The company plans on turning an incident that took place five years ago just a couple of...
Read more

League of Legends, the popular game developed and published by Riot Games, has amassed huge attention from the gaming community since its release in...
Read more

Apple held its ‘Unleashed’ event on the 18th of October and revealed two new devices, namely the new 14-inch and 16-inch MacBook Pro with the new...
Read more
Load more