2020 was a tough year for all of us, being locked up in our houses and bored out of our minds. But there were a few things that came to our rescue to pull us out of our monotonously dull lives. With the lockdown, people were forced to remain in their houses, some without any company at all.

For those people, multiplayer games became a savior. They allowed the players to “Socialize, in spite of Social Distancing” and an astonishing rise was seen in the number of people playing such games with the onset of the pandemic.

The popular battle royale game, PUBG became even more popular with it, gaining thousands of new players. It provided much-needed excitement and enjoyment to the players, all until the government decided to ban the game along with 117 other Chinese apps.

But after this ban, there was another game that came into the spotlight and entertained us with an all-new and unique concept. Yes, we are talking about none other than the winner of the best mobile and multiplayer game at the Game Awards 2020, Among Us. Among Us rose to fame in India after PUBG got banned and forged a place in everyone’s heart.

The social deduction game developed by the game studio Innersloth takes place on a space-ship, where the players get to take on the role of a crewmate or an impostor. The game was originally developed in 2018, but due to poor marketing on the part of Innersloth, it didn’t grab much attention. But in 2020, owing to Covid-19, the game rose to wild popularity and became one of the most downloaded games of 2020.

As discussed earlier, Among Us even bagged two awards, The Best Mobile Game and The Best Multiplayer Game at the Game Awards 2020, and they celebrated by unveiling an all-new map. The game previously featured three maps The Skeld, MIRA HQ, and Polus. The new map is called Airship and is said to be the biggest of all others.

The new additions to the map will include brand-new tasks and a large space for the players to move around.

One of the tasks from the trailer that caught the audience’s eye was the one featuring a garbage can.

The map will also include a transportation system consisting of elevators and ladders to move from one place to another.

But amidst all these new developments, the feature that excites us the most is that instead of starting off from the same emergency meeting room, like in all the current maps, the players will now be able to start off from different rooms after the vote-off.

Innersloth first teased the new map last month but we only got to see the lobby. The map is said to be based on an airship from Innersloth’s last game, the Henry Stickmin series, which is called the Toppat Clan Airship.

Fans of the Grand Theft Auto (GTA) series have been anticipating the arrival of the new GTA instalment,…
byTeam Oyprice
No comments

Using the Word “PUBG” in Relation to Battlegrounds Mobile India Could Lead to a Ban Again; Hints at New Sanhok Map 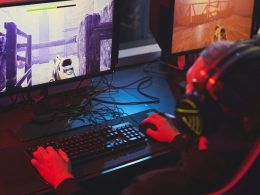